A research-led project that aims to contextualise scientific images (focusing on the micrographs created by electron microscopes) as  the products of manipulation from the various processes, people and technology used to create them. A scanning electron microscope or S.E.M uses electrons to create extremely magnified images, called micrographs. To build trust with science, the imaging process should not be distant from the non-specialist. The word “manipulation” has connotations of twisting the truth, but there’s never  ‘true’ image of anything. Manipulations are methods of discovery, without which images of scientific importance would not be made. With interviews and collaboration with technicians from The Francis Crick Institute, The Natural History Museum and The University of Birmingham, this project generated multiple outcomes but in particular performances and workshops that involve the non-specialist audience in the scientific image making process.

Workshops have taken place as part of the ‘Open Platform’ in the Reading Room at the Wellcome Collection and also at Goldsmiths. Elements of the workshop took place in a performance at Asylum Chapel in an event by Method Agency called “Prelon Musk: Acts of Kleinness”. It focused on facilitating discussion about manipulations, truths and discovery in scientific imagery and exploring practical, creative ways, such as directly editing micrographs through drawing, that the non-specialist can be part of the process of scientific imaging. Seven crafted objects have been imaged by a scanning electron microscope at the University of Birmingham. The process of creating a micrograph (a microscope image) is manipulation at multiple steps, from sample preparation to choosing the brightness and contrast. The various technologies, processes and people all mediate the final image. Manipulation in scientific imaging is a method of discovery and creativity. Can manipulations by a non-specialist in scientific imaging be considered scientifically valid? Participants are encouraged to further manipulate the micrographs of the seven objects. They are encouraged to draw on micrographs, draw from micrographs, draw from the objects the micrographs depict, cut up micrographs, photograph micrographs, zoom-in on micrographs...

Poster for the Reading Room Event 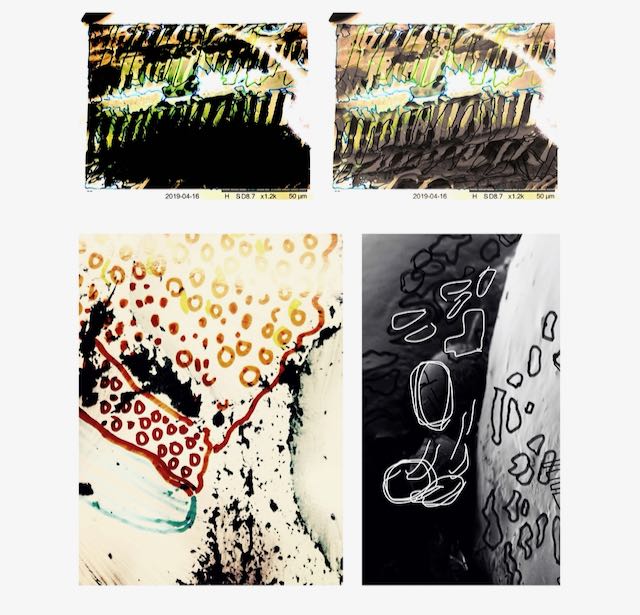 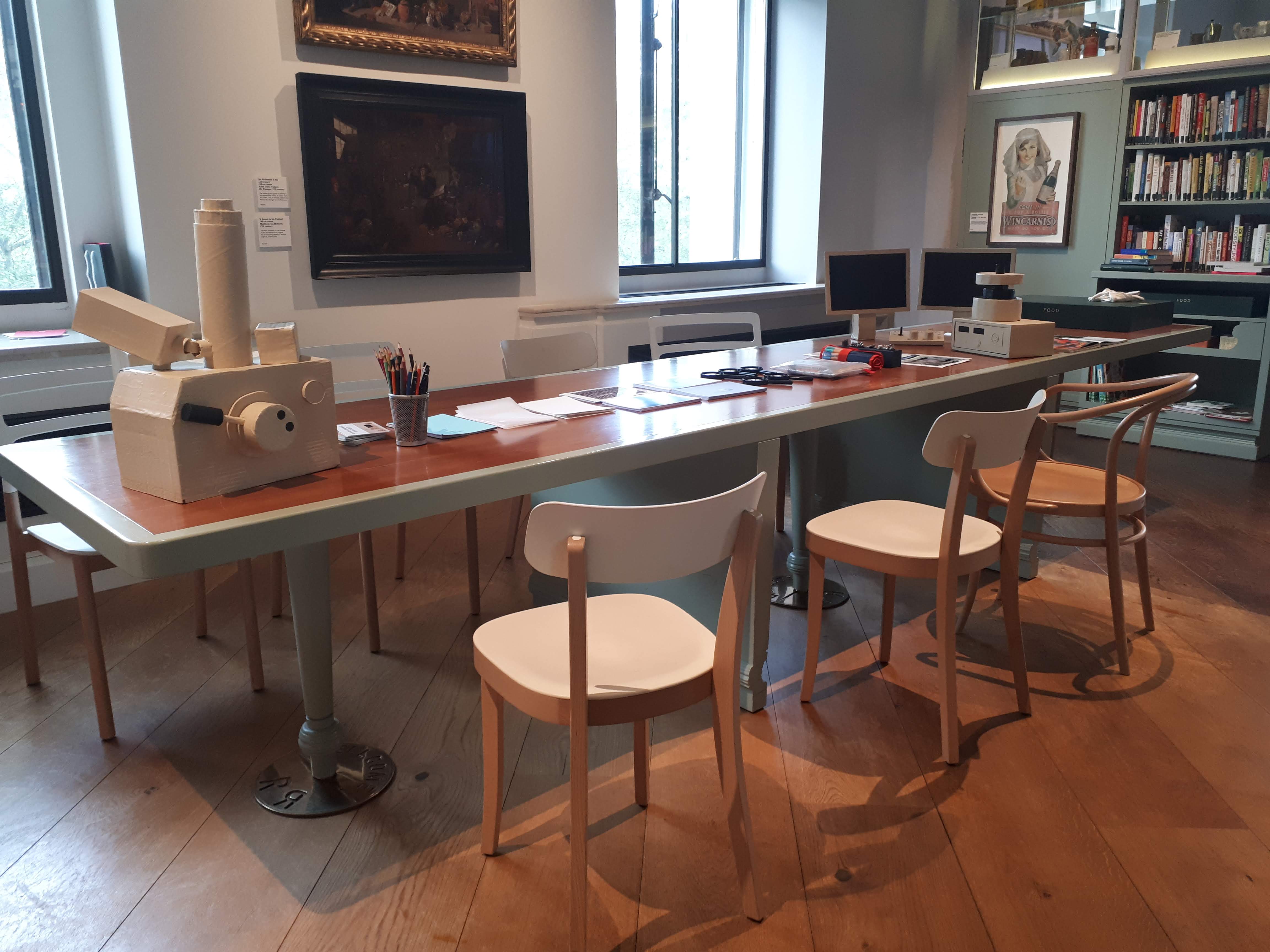 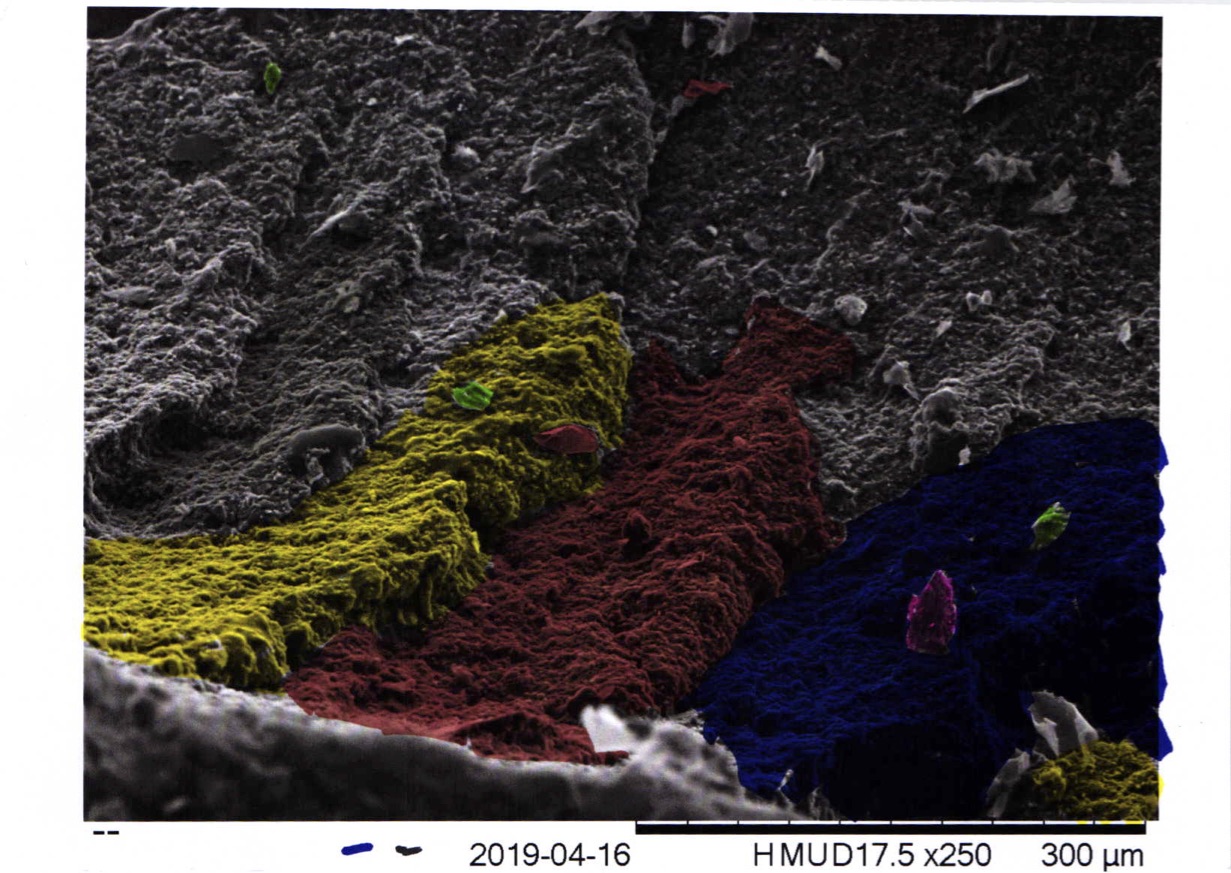 Excerpt from a workshop

Directed by the imaging process of scanning electron microscopy, the sample chosen will dictate my movements around the ‘lab’. Seven crafted objects have been imaged by a scanning electron microscope at the University of Birmingham. During this, numbered holes were punched out from a card designed to codify the ways the samples interact with technologies, processes and people before reaching an image – a micrograph. The punch cards are translated into actions and three-dimensional representations. The imaging process becomes the rules for performance.

Audience members chose one of the seven objects and based on their choice I punched out the correct numbers from a punchcard. Each number represents a different manipulation in creating the image (e.g if the Backscattered Electron Detector was used, I punched out number 14. But if the Secondary Electron Detector was used, I punched out number 15). Each number represents a different action in the abstracted lab set, while real imaging footage is displayed. Each punchcard was also translated into a three-dimensional object (an extruded punchcard) that encodes further information pertaining to the individual imaging processes. The correct extruded punchcard is displayed depending on the object chosen by the audience. Members of the audience then edited the micrographs from the Scanning Electron Microscopes with a smartphone which was displayed via a live feed to the screen in the performances, involving a non-specialist in the imaging process. The performance features the voices of Azumi Yoshimura and Anne Weston (The Francis Crick Institute) and Dr Alex Ball (The Natural History Museum).

Each of the seven objects I made to be viewed with the Scanning Electron Microscope is crafted with different materials so as to generate different interactions with the microscopes and require different sample preparations. For example, non-conductive material must be placed in a machine called a Sputter Coater to coat the sample in a thin layer of metal in order to work with the microscope. 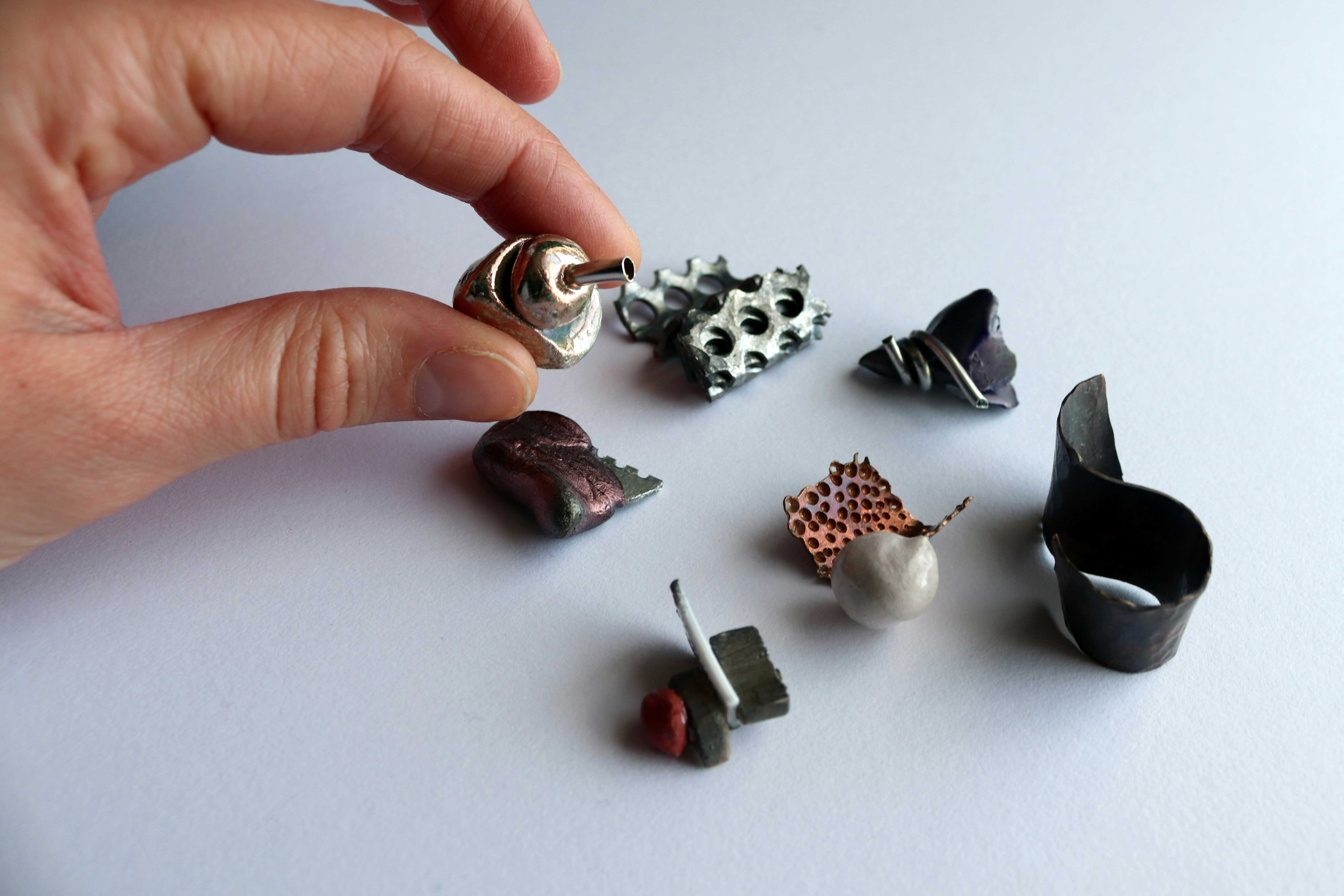 Lab footage, including one sample being sputter-coated 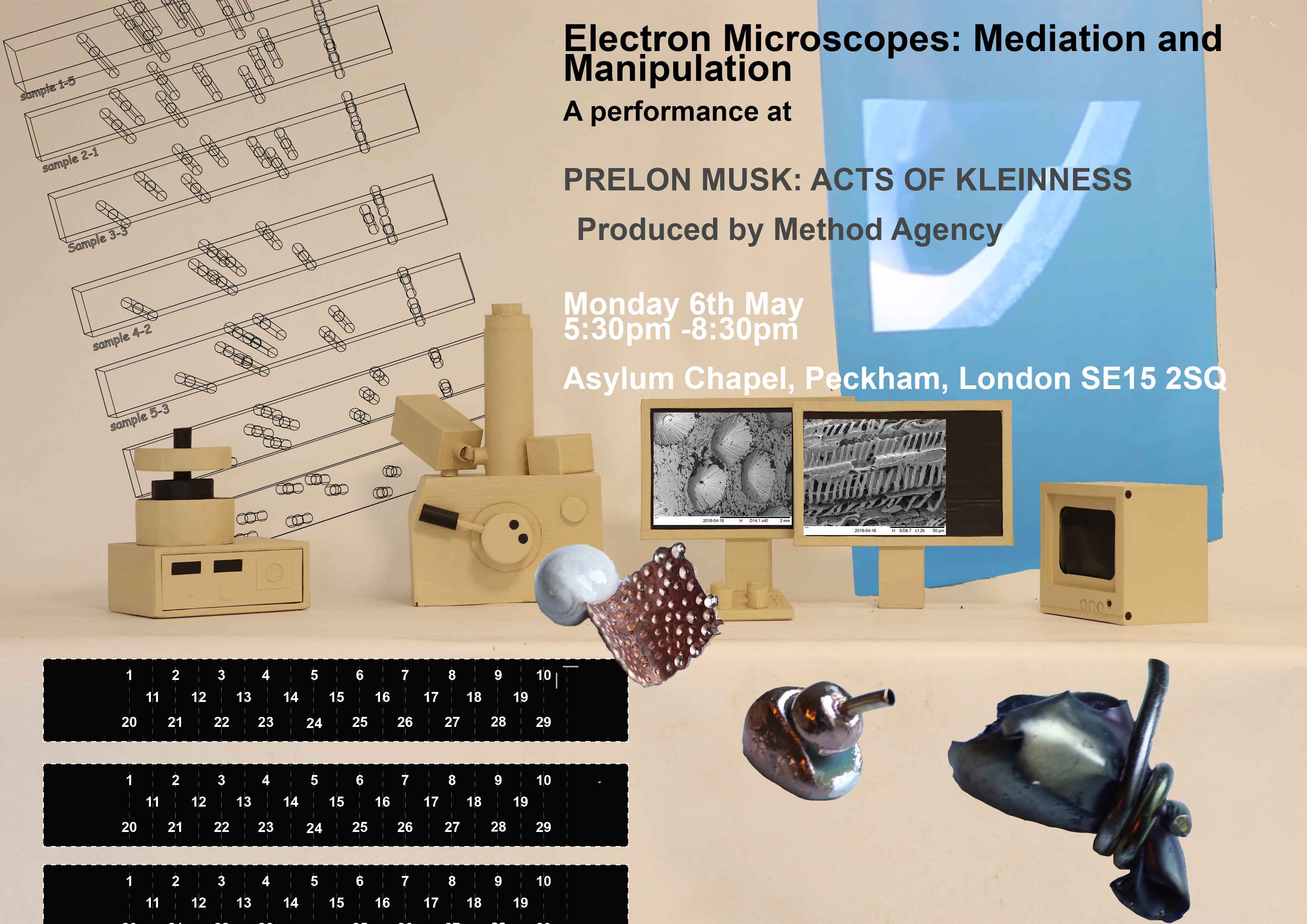 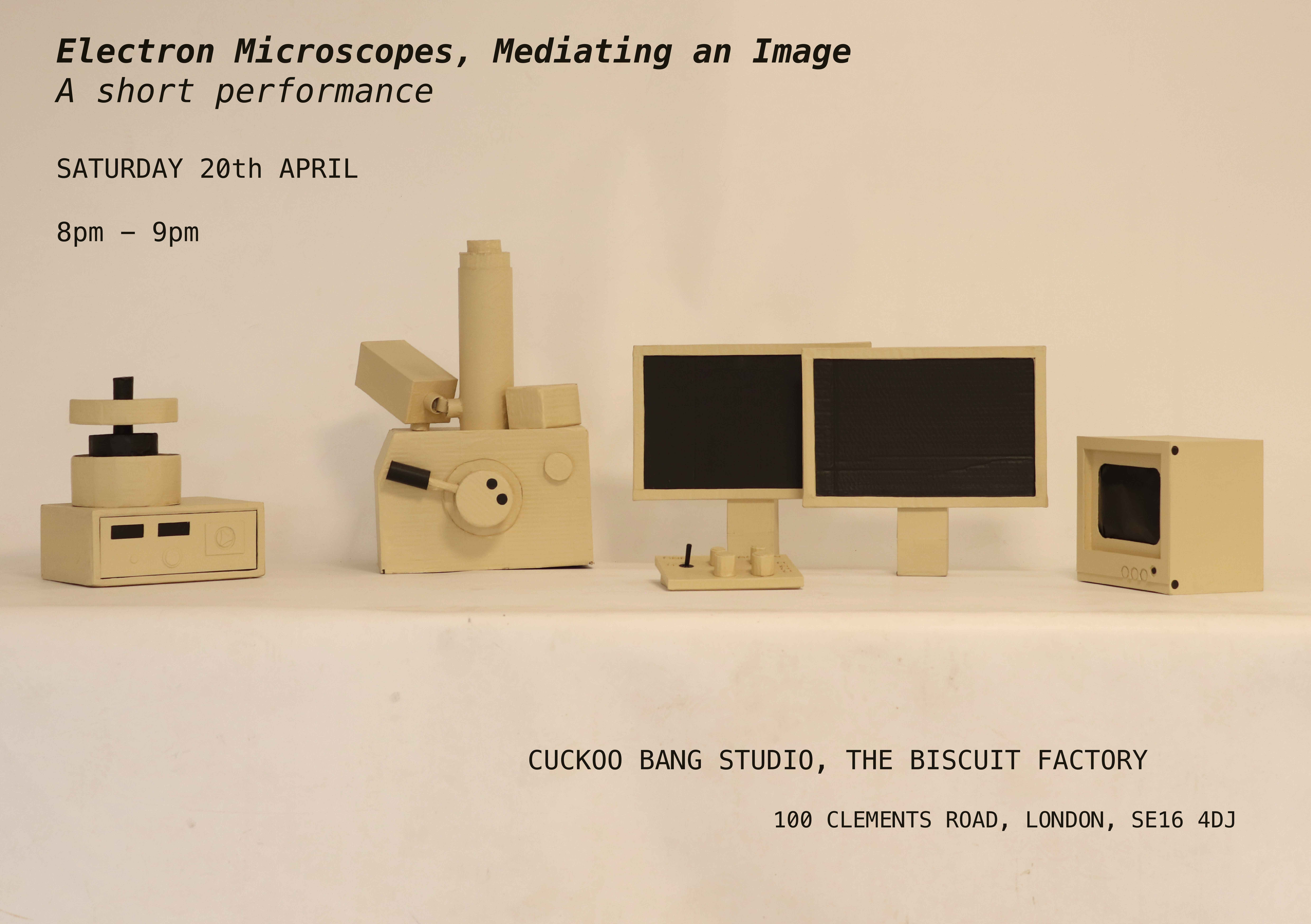 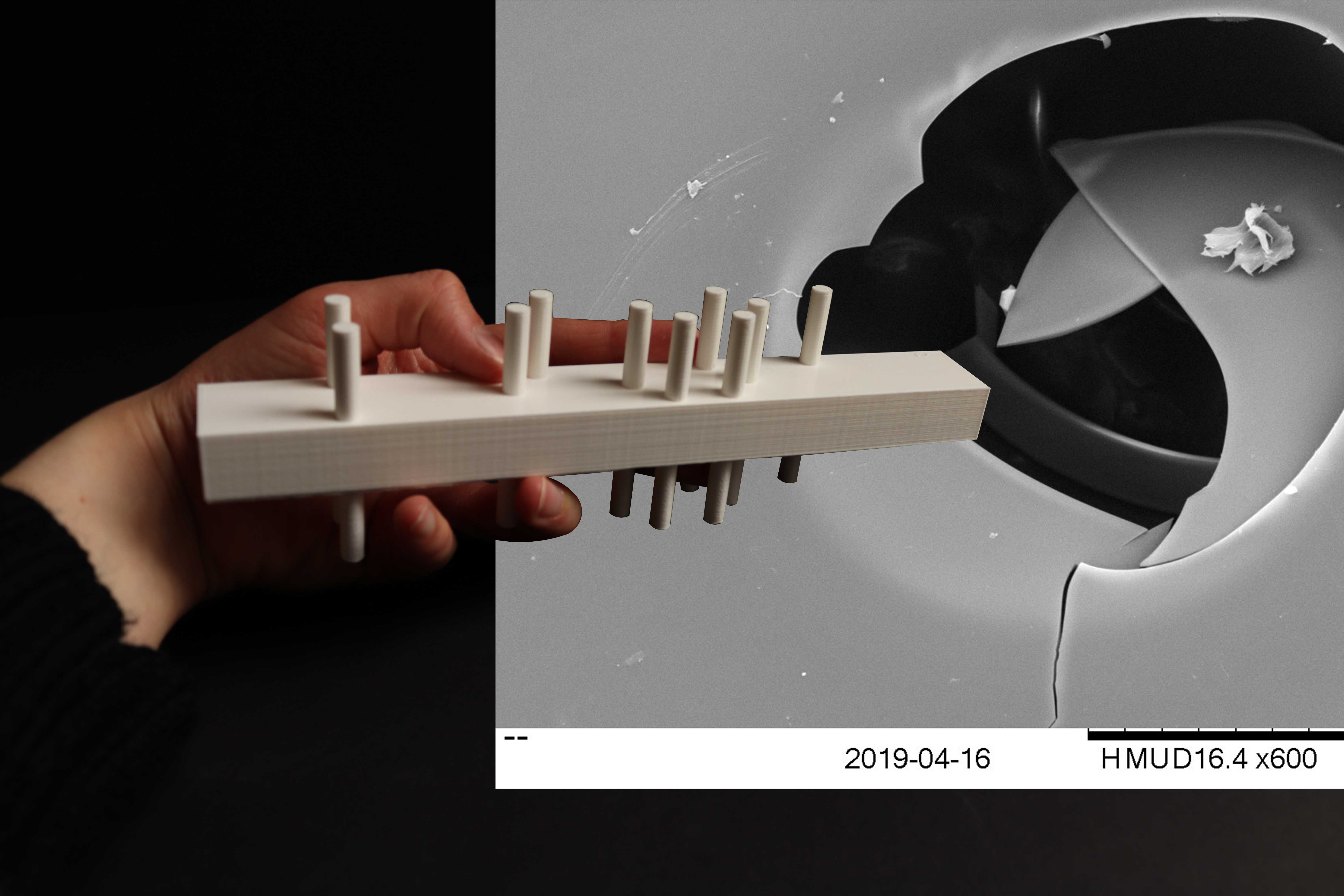 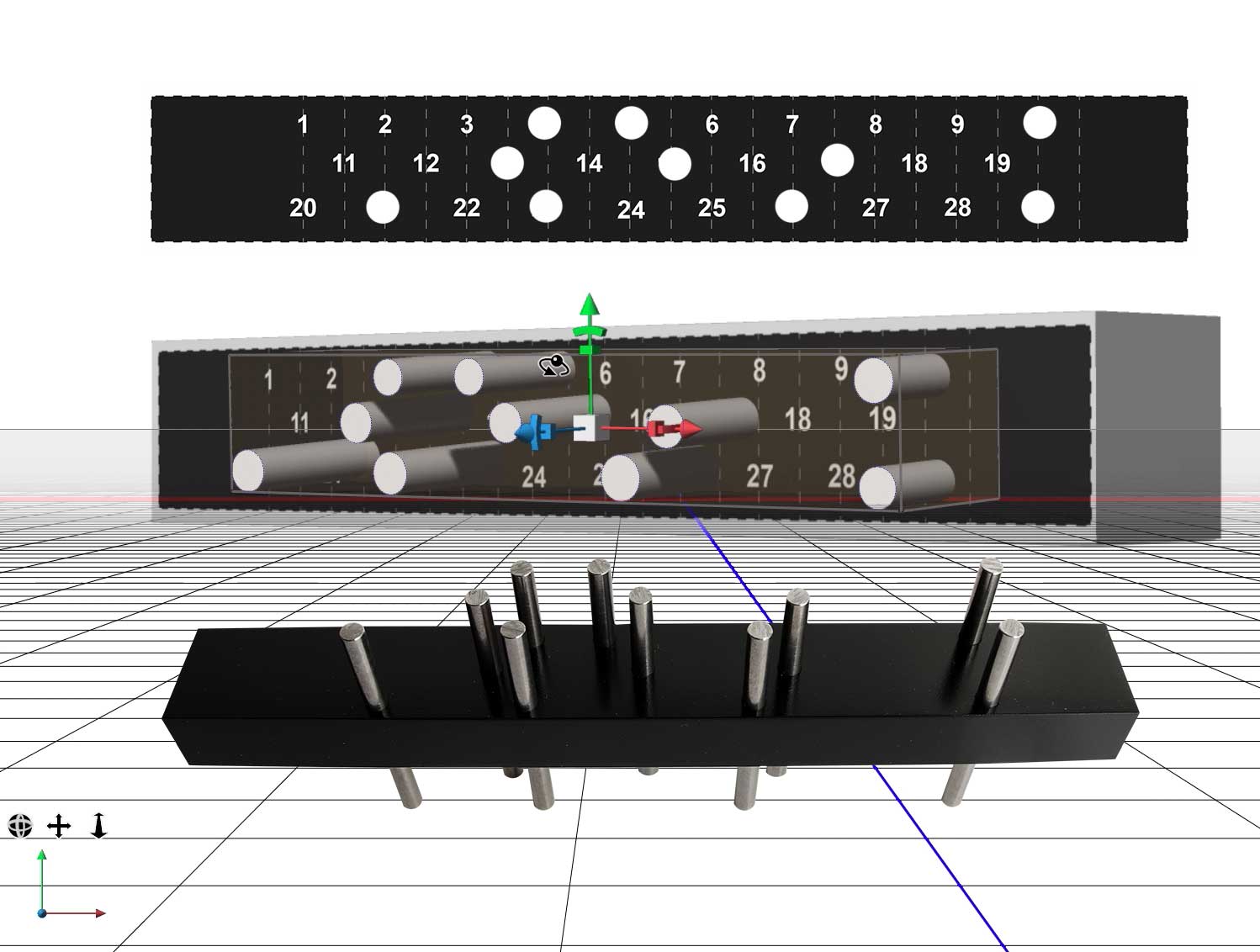 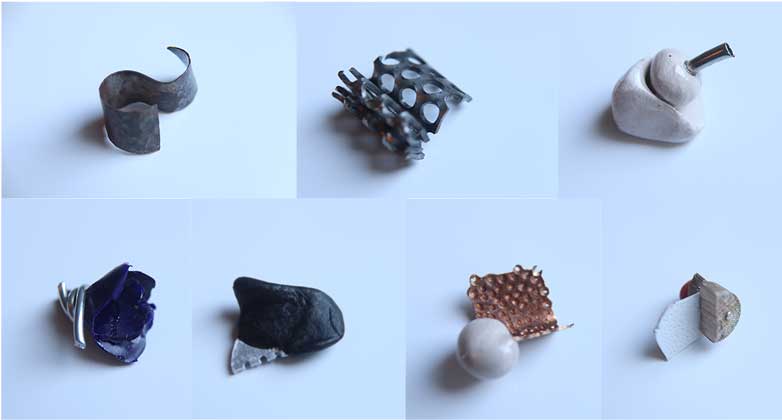 Rules for which numbers to punch-out from the punchcard as the objects were imaged at the University of Birmingham. The numbers then translate to rules for the performance. 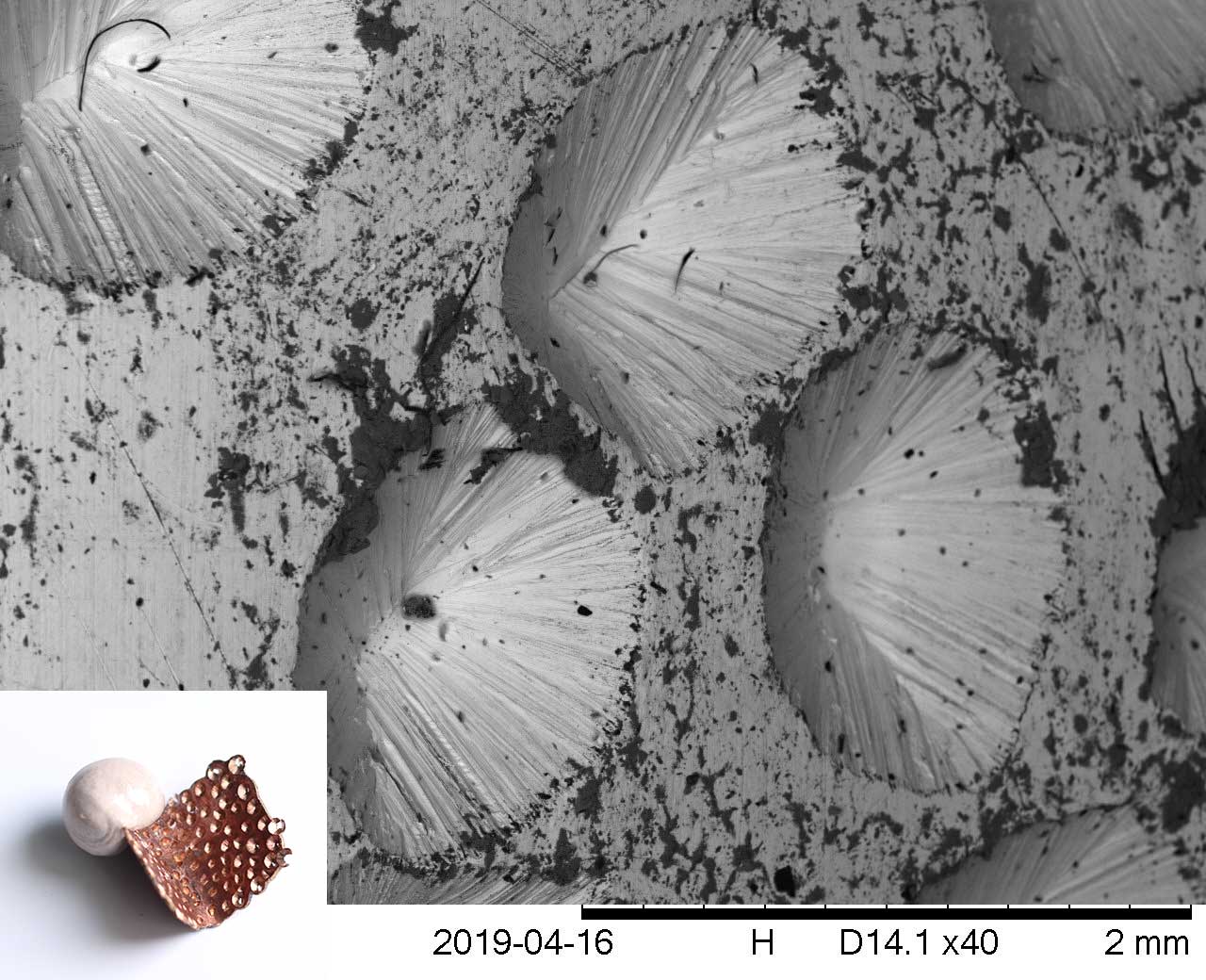 Micrograph created from the object in bottom left. It depicts the dents in the copper in immense detail. 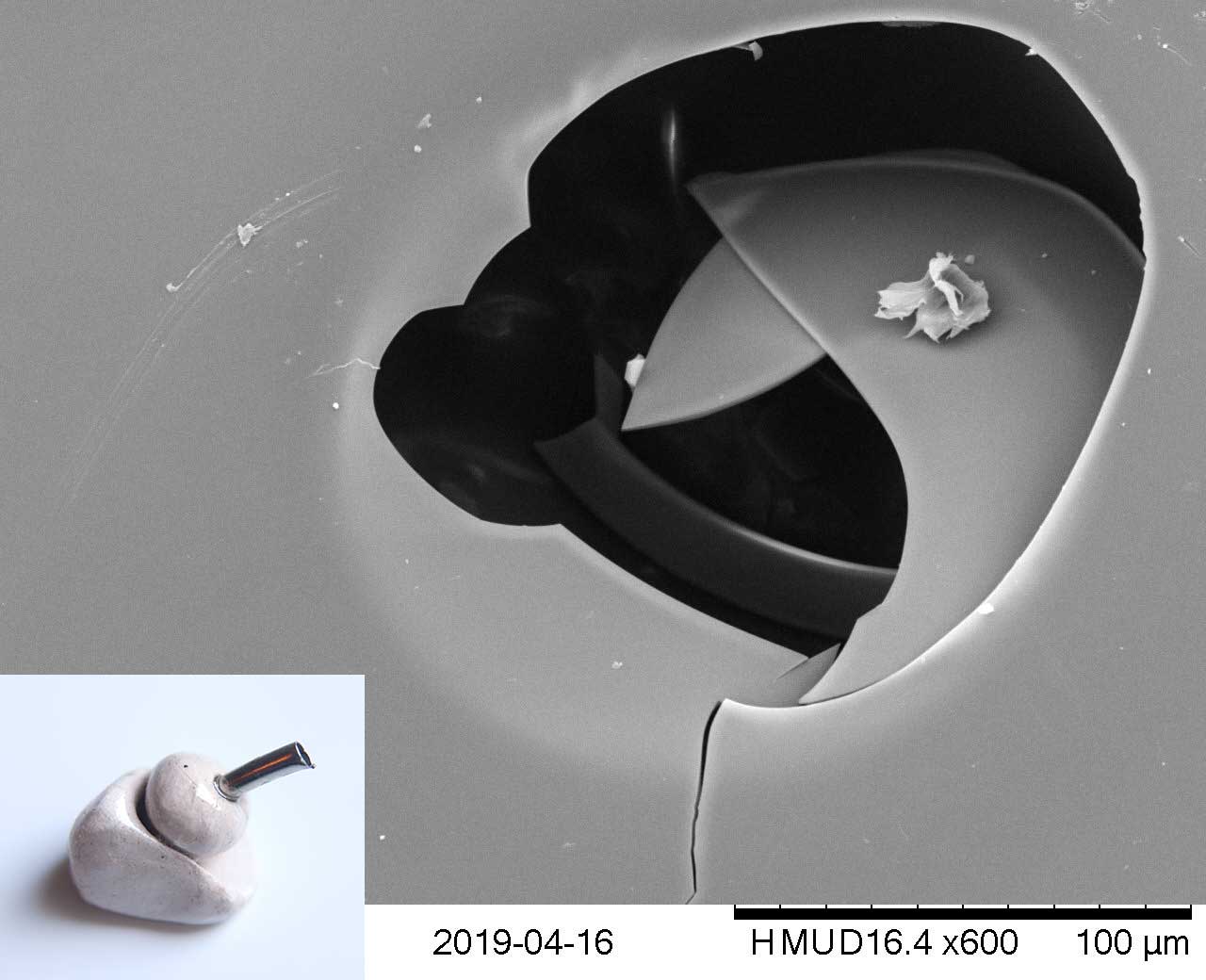 Micrograph created from the object in bottom left. It depicts a minute grack in the glaze. 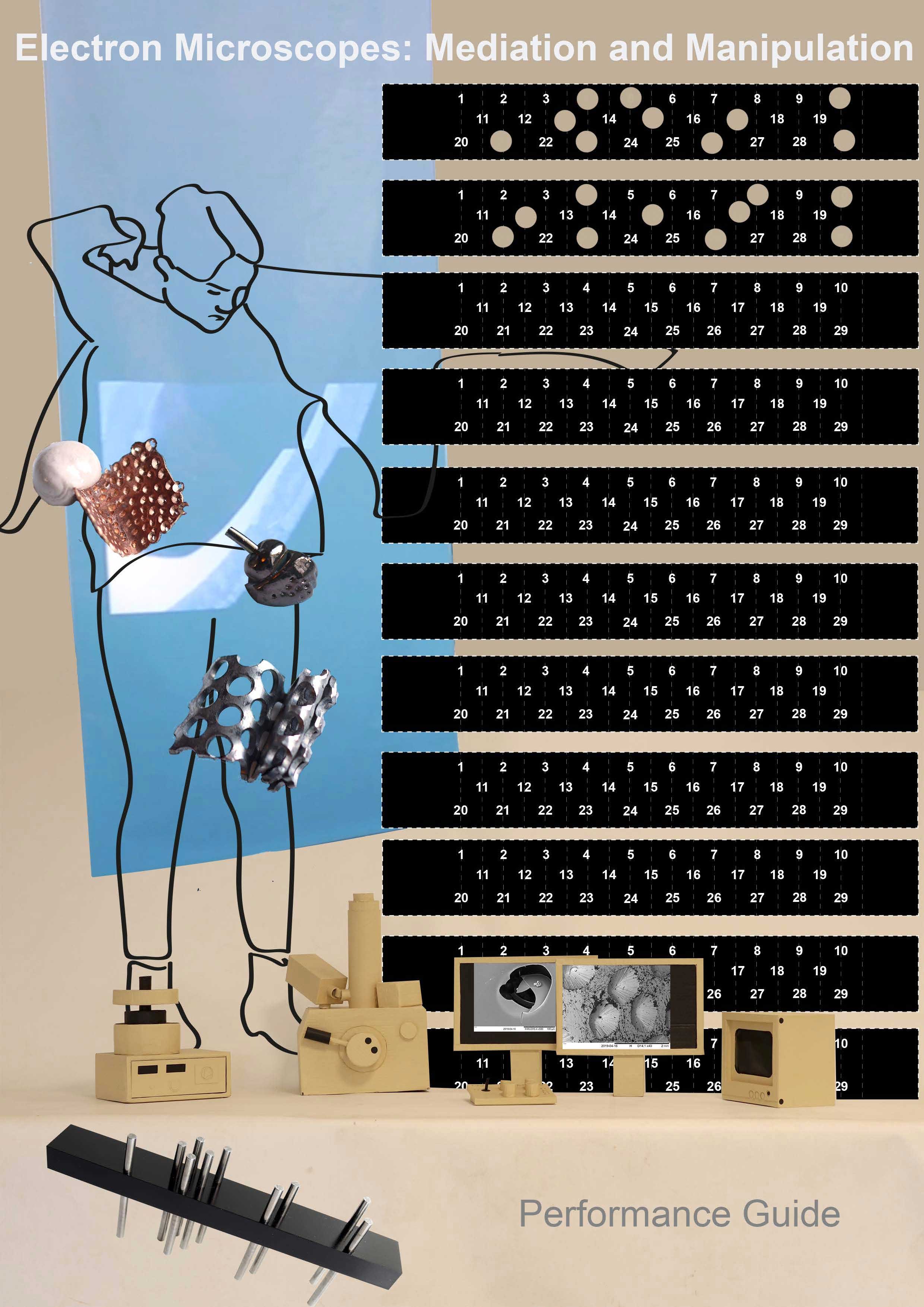 I created performance guides to help the audience understand and contextualise the performance. 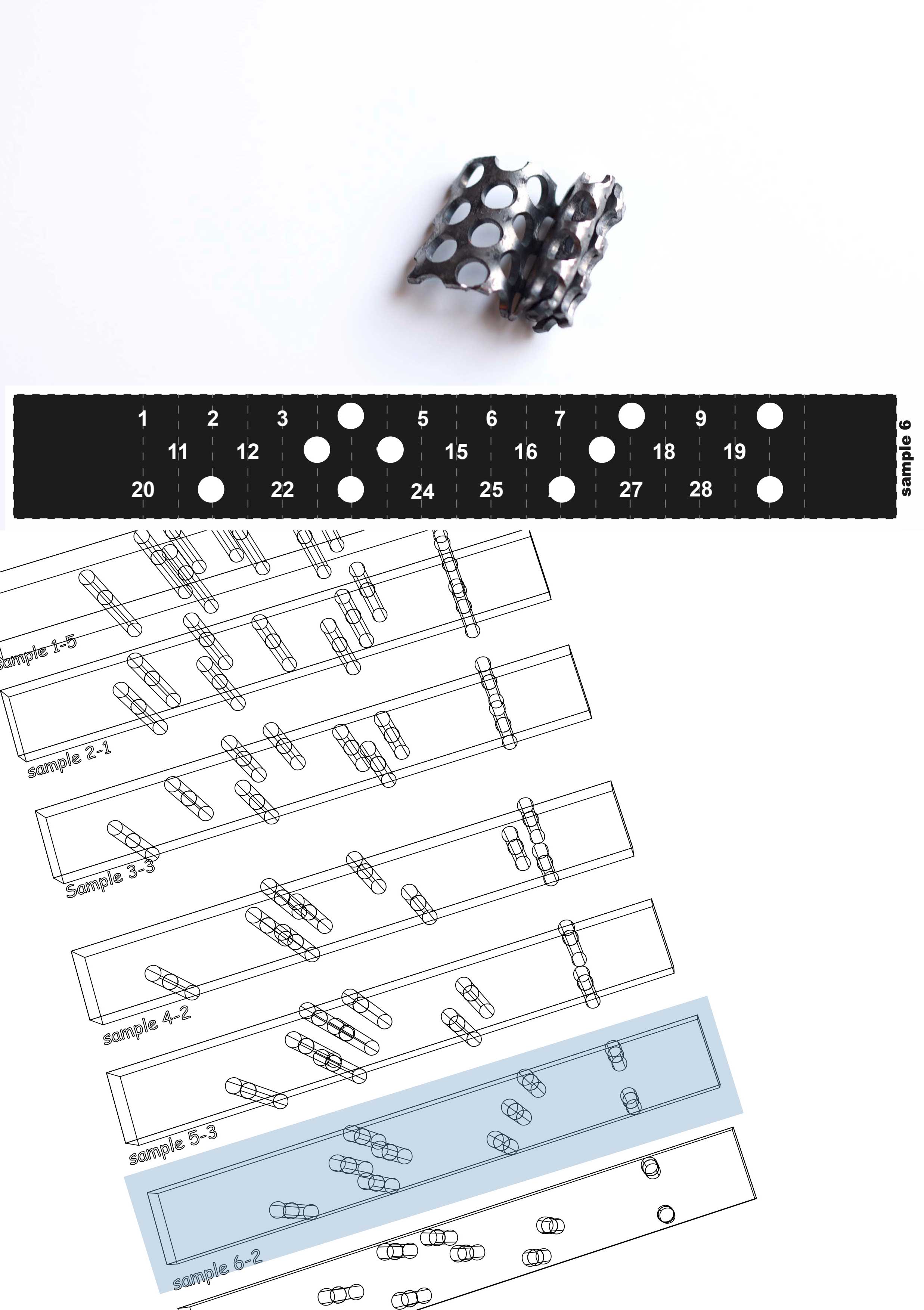 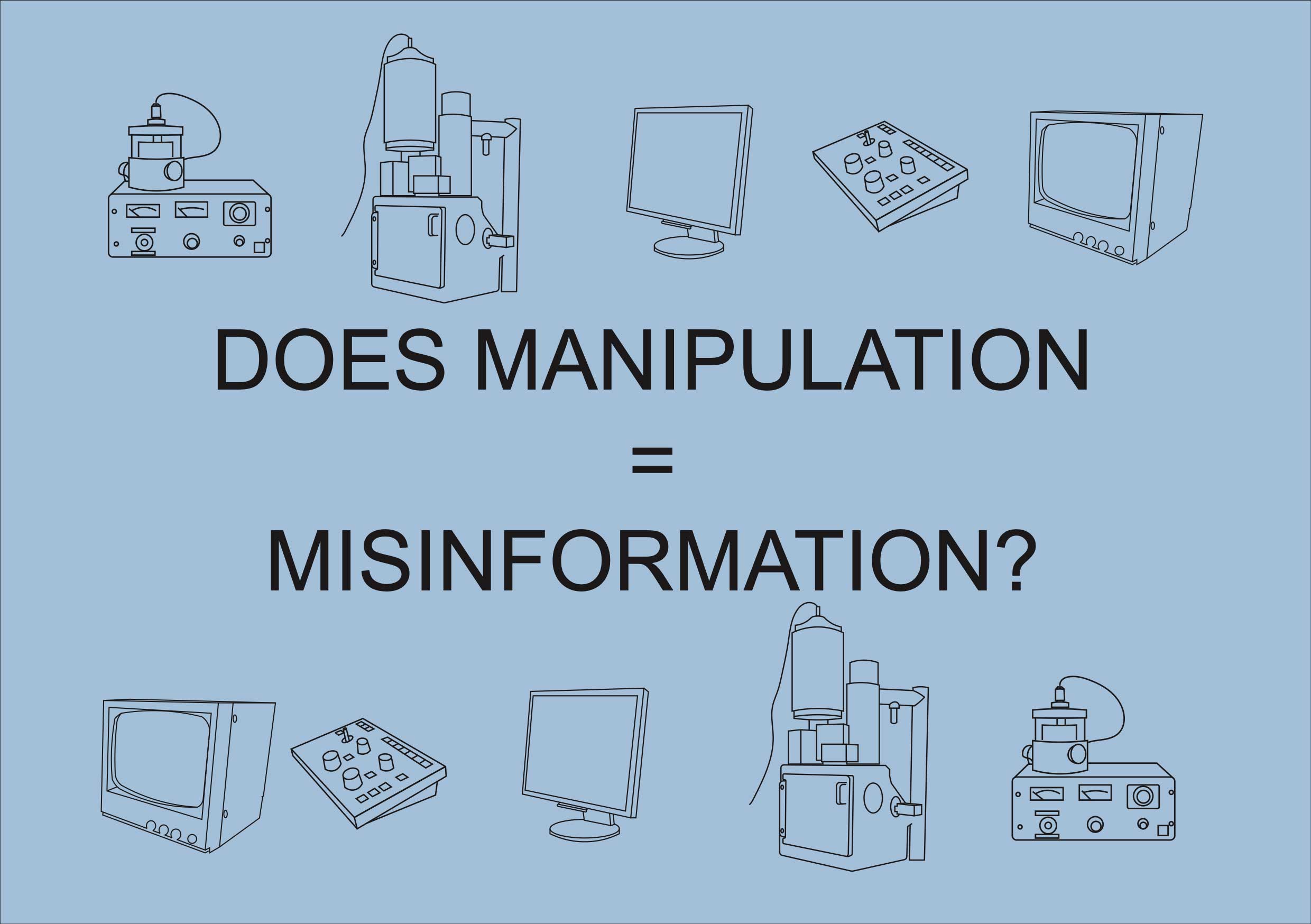 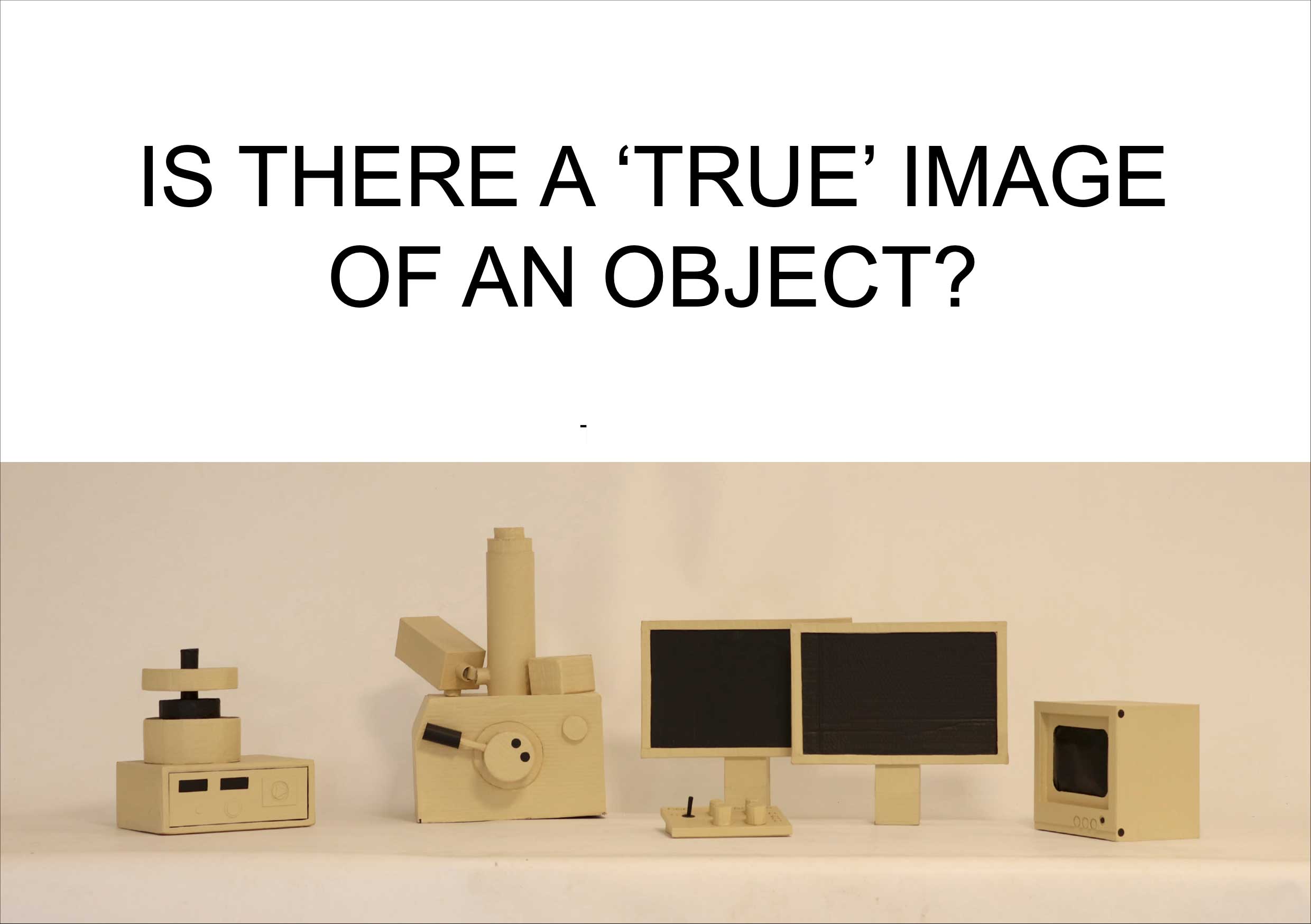 A few of the films, peformances, props and objects that went into the project.